Once a Garganey Duck…

It was on a hot sunny day afternoon that I was going in a boat with few friends and fellow photographers. The place we visited was Bhigwan. Bhigwan is a great place for birding and bird photography. I have already written a detailed blog on Bhigwan birds earlier.

Getting back to that hot sunny afternoon, as we paddled the boat into the waters from Kumbhargaon side, we were happy to see flocks of hundreds of ducks swimming alongside. As the boat would approach them, they would start changing the direction and then slowly pick up speed and fly to a further point, almost as if waiting for the boat to approach again.  This went on for quite some time.  As we neared the center of the lake, we realized that there was one duck which was swimming very frantically, diving in and out of water, but never changing its place.  As the boat neared it, the bird was frantic.  The wings fluttered desperately.  The dives became faster and erratic.  The water around the duck became turbulent.  This puzzled us.

And then it dawned on our local boatman, that the place where the duck was struggling was that of local fisherman’s net.  The Garganey duck was stuck in a fishing net!  We decided to save it.  And so we paddled closer.  The problem was that the duck did not know that we wanted to save it.  So the closer we went, it became more panicky.

Finally we reached the point from where we could reach the poor duck and free it from the net.  Just as we 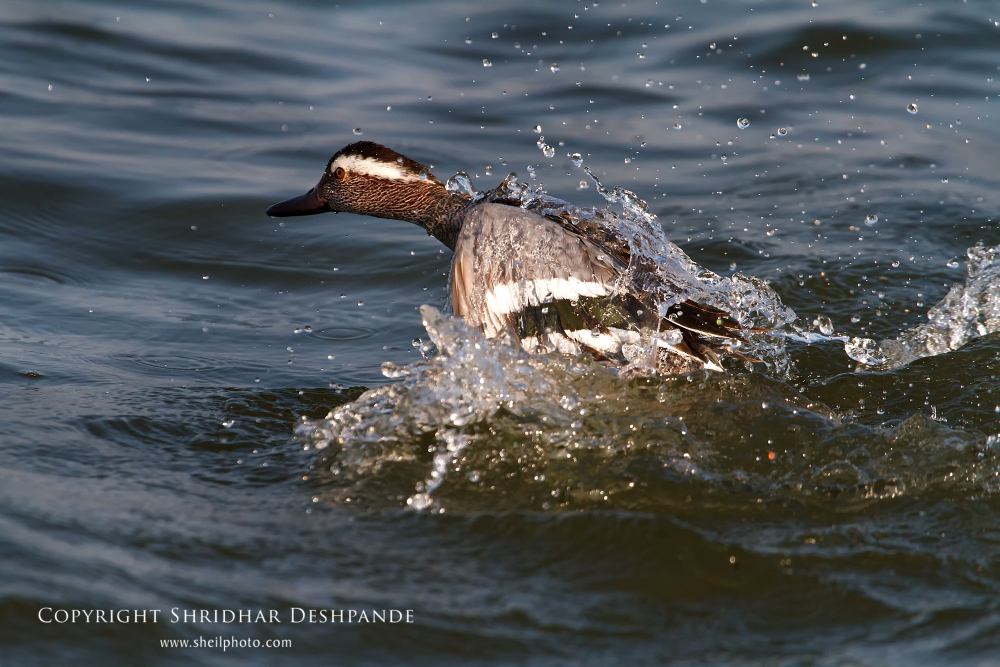 extended our hands to pick it up, it made a desperate dive underwater and vanished.  It did not surface for quite some time.  And then suddenly it came out on the other side of the boat.  Still caught in the net, it was unable to make its freedom flight.  Under it went again and this time came out on the side where we were ready to pick it up.  And we did.

Its feathers were badly entangled in the net.  Slowly and patiently, we untangled it.

During this process, I think, the duck realised that we were not there to harm it.  It relaxed a little.  Once it was free from the net, we thought it would just fly away.

But the whole struggle had tired the duck.  It had no strength left to make any movement.  We got it on the boat and there it stayed without showing any signs of fright or desperation.  I guess it felt comfortable.

And then it suddenly made a quick move and shifted to a place under the board of the boat.

We continued with our endeavor of bird photography.  It was only when we were returning to the shore, almost a couple of hours later, that we

decided to release it back in the water.

There was no sign of resistance when we picked it up again and released it in the water.  That rest for a couple of hours had made it strong again.  And as soon as it touched the waters it made a small turn backward, almost like saying “Thank You Guys!” and it was off like a bullet.

Garganey ducks are beautiful, delicate and now I know even trusting.

Sheil’s Photography conducts training workshops in digital photography. These workshops range from the basic to highly specialized levels.
To reach out to the author of this article, click on the button.